The paradoxes show up in the Across The Block column published in our October 8, 2021 issue. The calm of a Kawase Hasui painting is balanced with the energetic photo shoots of pin-up Bettie Page. A gold coin with a face value of $ 5 costs $ 20,000. The spirit of the embodied gift, belnickel, is bought from the highest bidder. Okay, maybe the latter is less paradoxical and more the reality of Christmas. Either way, this week’s Across The Block has it all!

EAST DENNIS, MASS. – The Netsuke Gloria and Joe Kurilecz Collection, a Lancaster, Penn., And a Western Massachusetts Collection are just a few of the private collections on display at Eldred’s annual Asian Art Auction September 22-24 at company headquarters on Cape Cod. A painting by Japanese artist Kawase Hasui grossed $ 26,250, sold online to a long-time customer. Hasui was a prolific printmaker, with over 600 original drawings to his credit. This painting has the same type of atmospheric qualities that you typically see in any of his prints. It is signed and stamped lower right and in the lower left margin. For more information, www.eldreds.com or 508-385-3116. 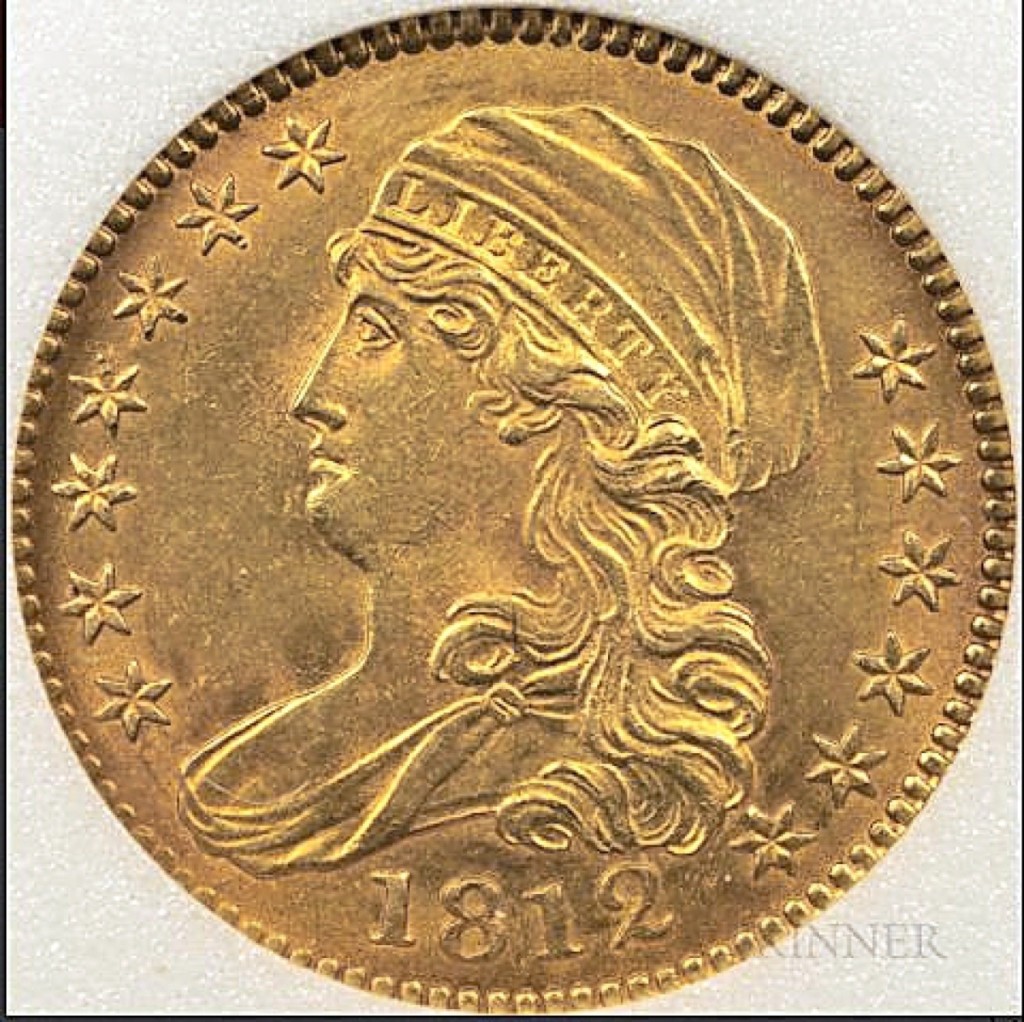 No small change to Skinner’s Coins and Currency auction

MARLBOROUGH, MASS. – The September 21 Skinner Coin and Currency Auction was a hit with collectors, offering many coins from Ancient Greece and Ancient Rome and selections from American history in silver and gold. Under the direction of department director David Donahue, the online catalog featured a greater number and variety of high-resolution images, attracting the interest of collectors. The best seller was an 1812 Half Eagle which made $ 20,000. A gold coin with a face value of $ 5, the coin was minted in a young country that is still asserting itself on the world stage. Daily life was disrupted by the War of 1812, and the currency suffered from the war efforts and the decades that followed. A large majority of the earliest gold coins were either lost, melted down or otherwise destroyed. The offered Half Eagle from 1812 was not in circulation, suggesting that the coin was purposely kept when the conflict with Britain erupted. For information, www.skinnerinc.com or 508-970-3255. 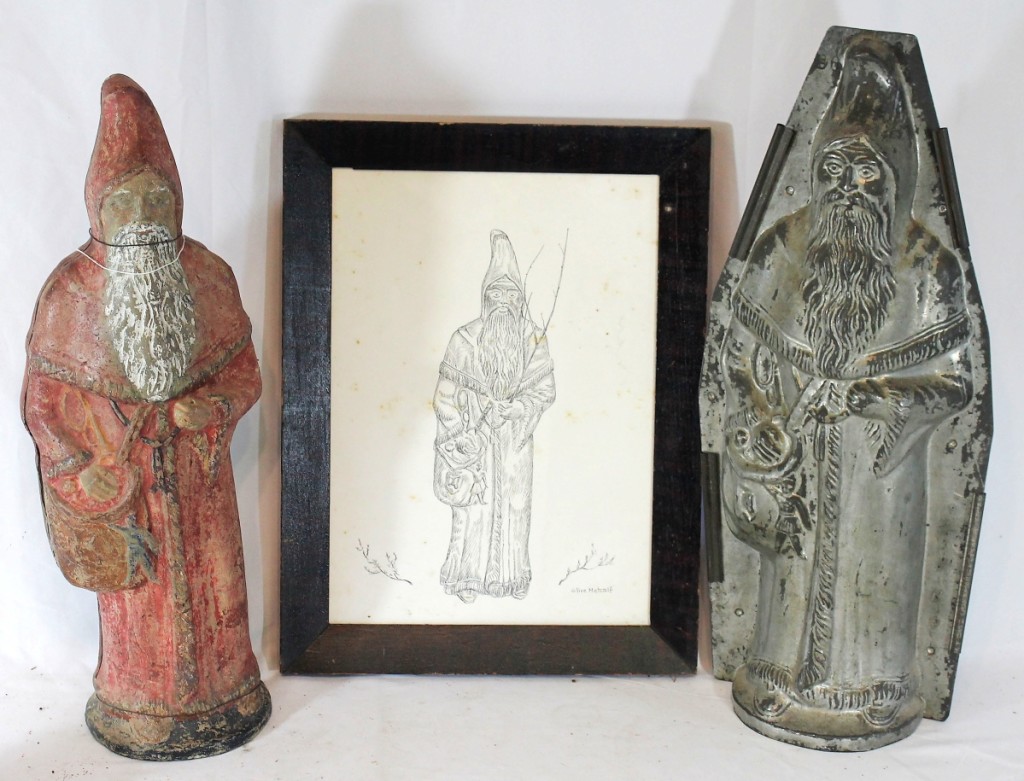 WESTMORELAND, NH – “We had a fantastic sale,” said Roxanne Reuling of Flying Pigs Antiques, speaking of the company’s September 27 auction featuring the estate of Linda Peterson Heard, a personal collection of antiques. primitive and American country. “It was sold 100% which is amazing.” The top lot was an antique Belsnickel mold with a composite Belsnickel that Heard had made using the antique mold, as well as a drawing of the Belsnickel by Olive Metcalf. The 20-inch-high mold sold for $ 2,500. For more information, 603-543-7490 or www.flyingpigantiquesnh.com. 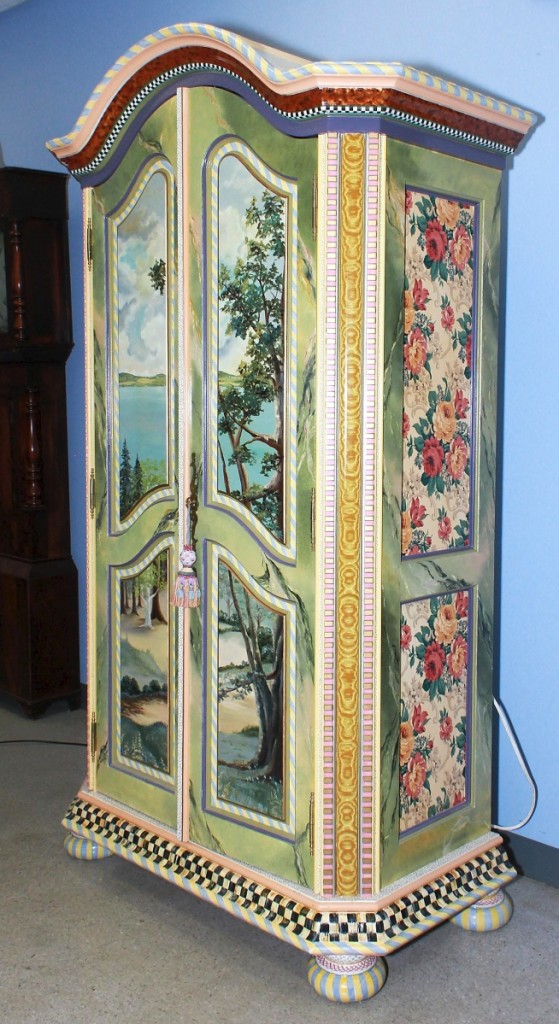 CHADDS FORD, PENN. – William Bunch Auctions presented its quarterly and decorative arts auction on September 28, a sale that featured a collection of fresh market antiques, fine art, glass, porcelain, furniture of all ages and styles, silver , jewelry, Asian, porcelain, glass and much more. Among the 478 lots that crossed the block was an office cabinet decorated with Mackenzie Childs paint (shown) that sold for $ 15,000 and a set of four carved mahogany federal dining chairs that exceeded their estimate of $ 100/200 to end up at $ 11,000. The cabinet featured paneled doors with painted landscape scenes, side panels with floral decoration, a lighted office interior, and an office interior fitted with painted checkered slots and drawers. The chairs, 35 inches high, featured padded seats on saber legs. For information, www.bunchauctions.com or 610-558-1800. 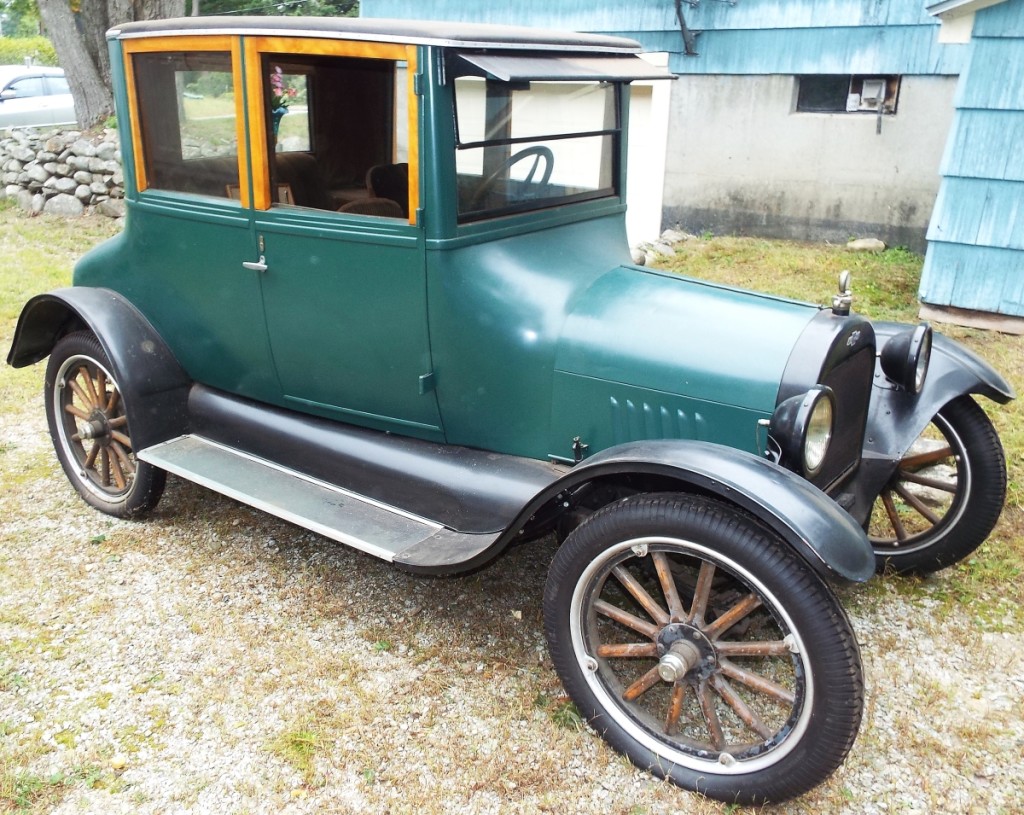 EPSOM, NH – Auctioneer George Foster III calls his business The Complete Auction Service, an accurate description of the business that works with estates and trusts to bring merchandise up to auction for antiques and collectibles. Most recently, on September 30, Foster dispersed a lifetime collection of cars, auto parts, and parts from an elderly man who has a 60-year build-up. The online auction had bidders from Maine to Texas. “The sale went well,” said Foster. “We were satisfied. The best-selling vehicle was a rare 1922 Chevrolet coupe for three people, called the Chevy 490 because, according to Foster, $ 490 was the price of the engine at the time. The car brought in $ 5,865. For more information, 603-736-9240 or www.thecompleteauctionservice.com. 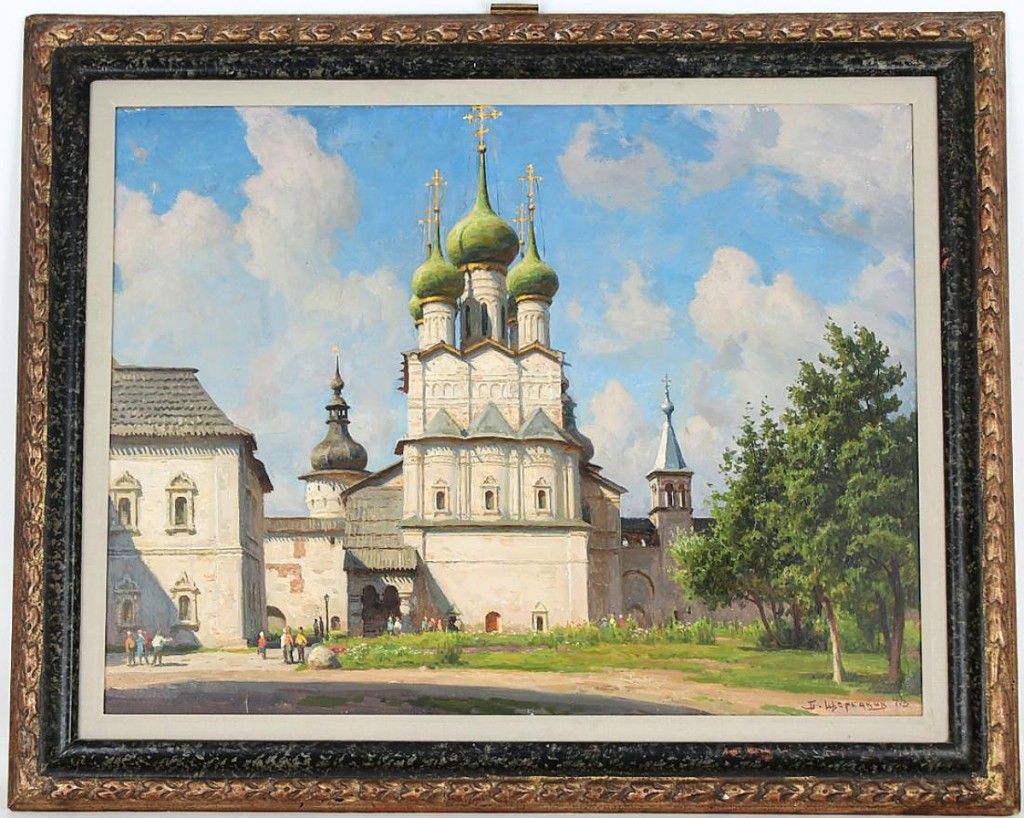 SARASOTA, FLA. – Several buyers from Russia noticed a painting in Saint John’s Church in the Kremlin by Boris Valentinovich Scherbakov (France, Russian Federation, 1916-1996) which was offered for sale at the Helmuth Stone Gallery on September 26. The estimate of $ 7 / 10,000 has helped inspire several Russian telephone bidders as well as online competition; in the end, the 19 x 25 inch oil on canvas – which was from the region – sold to a collector in Moscow for $ 20,570. For more information, 941-260-9703 or www.helmuthstone.com. 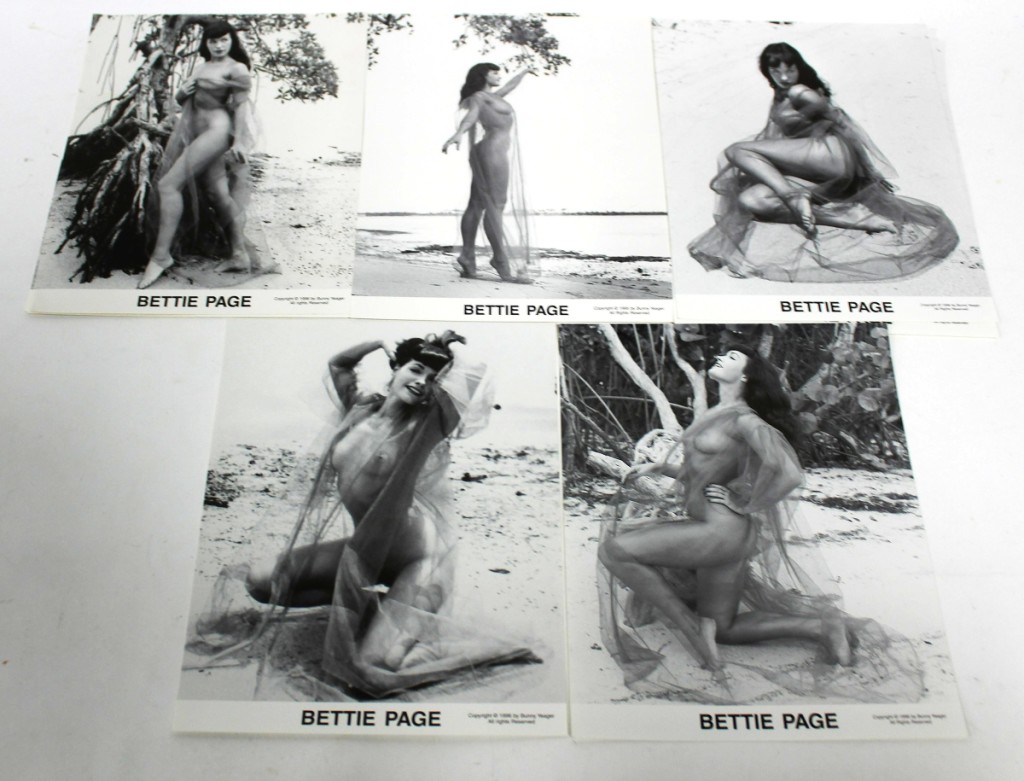 NEW WINDSOR, NY – Mid-Hudson Auction Galleries gradually sold the Bunny Yeager archives and topped the latest round of offers – 288 lots on October 2 – was a 200 page lot of photos. Each 8×10 inch page showed Bettie Page in five different photos for a total of 1,000 photos in the bundle, three of which were signed by Yeager. Estimated at $ 600/800, the auction for the lot opened at $ 300 and ultimately sold for $ 1,159. For more information, 914-882-7356 or www.midhudsongalleries.com. 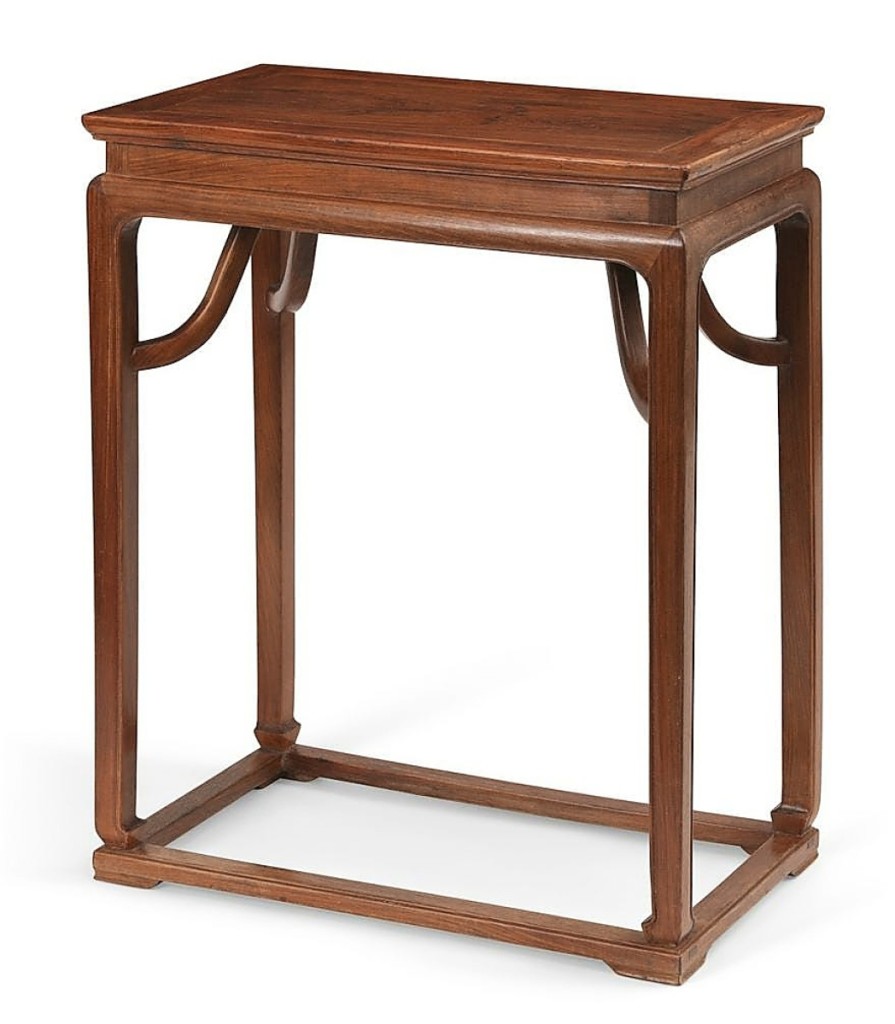 LOS ANGELES – Chinese wood furniture was in the spotlight at Andrew Jones Auctions’ “Eclectic Eye” sale on September 27, led by three works that reached five digits. A Chinese hardwood table (shown) with curved, plunging supports between the legs and underside sold for $ 21,875. A circular pedestal sold for $ 12,500 and a pretty rootwood center table sold for $ 10,400. For information, 213-748-8008 or www.andrewjonesauctions.com. 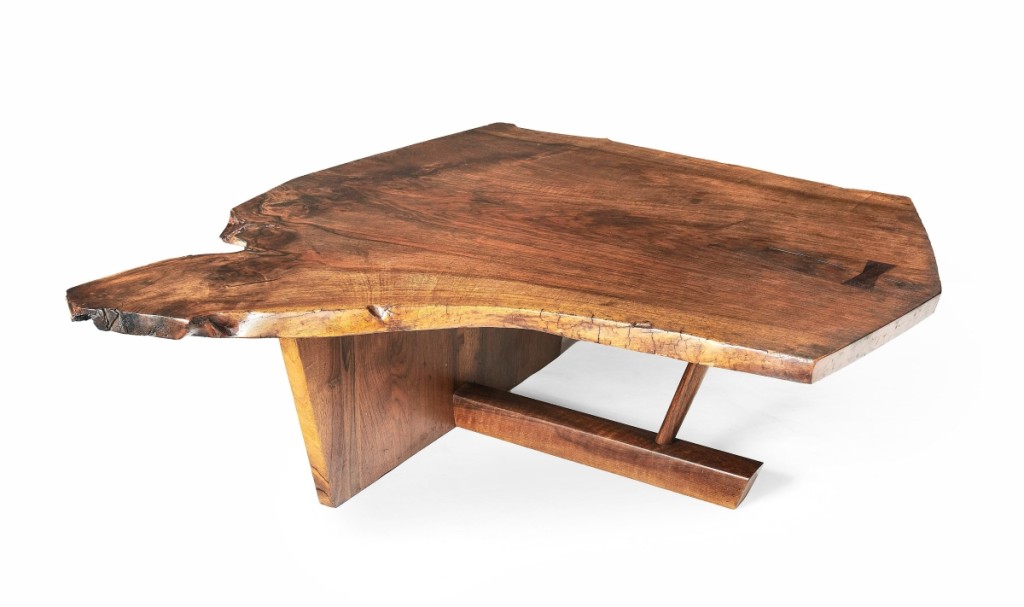 Nakashima leads for the capsule

NEW YORK CITY – Capsule Auctions of New York City and Litchfield County Auctions of Litchfield, Connecticut teamed up for another successful and short sale on September 30. The 110-lot auction saw star works by Wayne Thiebaud and Cy Twombly move up the charts, but it was the furniture created by New Hope craftsman George Nakashima that lifted the paddles. An English walnut “Minguren II” coffee table would cost $ 29,900, while two sets of three “Amoeba” nesting tables with black walnut tops fetched $ 28,600. Both were made in 1972 by Nakashima for a Susan Nayor. For information, www.capsuleauctions.com or 212-353-2277.

Where to get a personal loan with ...

Lawmakers, inspired by the “Pandora Papers”, to ...