Part of the American furniture included in the sale. The large red cabinet sold for $ 5,900.

Review and photos on site by Rick Russack

PLAINFIELD, NH – Bill Smith began his September 11 sale with a minute of silence commemorating the events of September 11. He then took a moment to promote an upcoming show in Norwich, Vermont, and stores in other nearby towns. Then he got down to work. The second batch he sold indicated what kind of a day it could be. This was an exceptional red painted burl bowl with good provenance and sold for $ 10,300, more than three times the estimate. Nine of the first ten lots exceeded estimates. More than 230 lots in the sale were from the collection of Richard McGovern, who had restored a nearby historic house and filled it with fine antiques and Americana furniture, much of which had not been on the market for years. years.

The sale went live, under two large tents, three online platforms were in use, several phone lines were chatting and there were many buy orders. Attendance was not where it was back when Smith wasn’t using the internet, but there were still 100-150 potential bidders in attendance. At the start of the sale, Smith asked those in attendance how many first-time attendees were and several hands were raised. The sale brought in just under $ 909,000.

The highest-grossing item in the sale was a Rolex Submariner 18k yellow gold men’s wristwatch with its original 18k yellow gold Oyster bracelet. The purple mist dial, 40mm in diameter, had a blue ring. The original box and papers were included, and Smith has guaranteed its authenticity. He finished at $ 29,500. Another Rolex, a GMT Master Pepsi men’s watch in stainless steel with a 40mm dial, fetched $ 14,160. There were many other pieces of jewelry, including an 18k yellow gold ladies’ bracelet, 28mm wide, set with approximately 1.50 carats total of rubies and diamonds, which weighed 99.1 grams. It grossed $ 4,425 and a platinum-set emerald and diamond ring, with GIA certification, sold for $ 3,540. 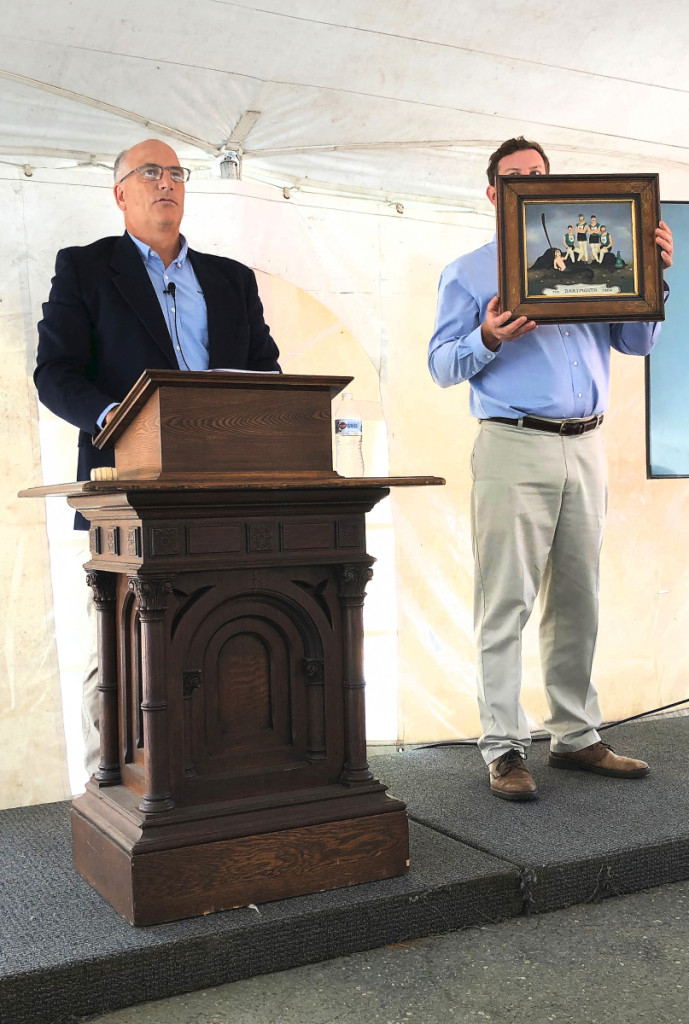 While it was probably the early furniture and Americana that drew the crowd, the older automobiles should be mentioned. While not with its original paint, you couldn’t miss the iconic 1959 Cadillac El Dorado four-door hardtop parked next to the auction tent. That year, the car had raised rear spoilers, dual taillights and a distinctive grille. This model was over 18 feet long and weighed over 5,000 pounds. It was in working order but sold as is. It had been repainted bright pink and its actual mileage was uncertain. It came with many records and sold for $ 16,520, more than double the estimate. There was also a red MGB convertible from 1977, eclipsed by the Cadillac. It had a four-speed manual transmission with 95,565 miles and sold for $ 3,540.

The American furniture collection included select pieces, many with original and untouched surfaces. Topping the selection was a slanted Chippendale reception painted in intact bird’s-eye maple red, circa 1780-1800. It had a lowered fan-carved brown painted interior with four graduated drawers below on an applied support base and retained its original brass. It brought in $ 20,060. Bringing in $ 6,490, with a provenance from Israel Sack, was an 18th-century mahogany four-drawer chest of drawers from Massachusetts.

Two first tavern tables each attracted several competing bids, and each sold for prices far exceeding estimates. An 18th century example of William and Mary from New England sold for $ 10,620. It had a single long drawer, a turned maple stretcher base, and a single-plank pine top with breadboard ends. In a first Spanish brown painting, he made $ 10,620. Another old tavern table, this one circa 1800 with an oval two-plank top, turned sausage stretcher base, and older charcoal painting, fetched $ 6,490. Its provenance included Mary Aliss, who died in 1987. Surprisingly all, including Bill Smith, was a seemingly simple one-drawer rack circa 1800. It had a square single-plank tiger maple top with a single drawer in tiger tailed maple. ‘dovetail, on square tapered tiger maple legs in an old and probably original finish. He made $ 7,670, well above the estimate of $ 1,500. An 18th century gumwood kas from the Hudson River Valley sold for $ 7,080. It had mahogany panels and moldings, a molded tiered cornice, and was cataloged as “the brasses are in the original holes and the legs appear to be original with a dark stain.”

American furniture, as good as it was, did not include the most profitable batch of furniture. That was a lot with two near-matching neoclassical fruitwood inlaid chests of drawers from northern Italy, “made in the style of” Giuseppe Maggiolini, a late 18th-century Milanese cabinetmaker who also did marquetry. The construction techniques seemed to be by the same hand but the tops were slightly different. They finished at $ 21,240. 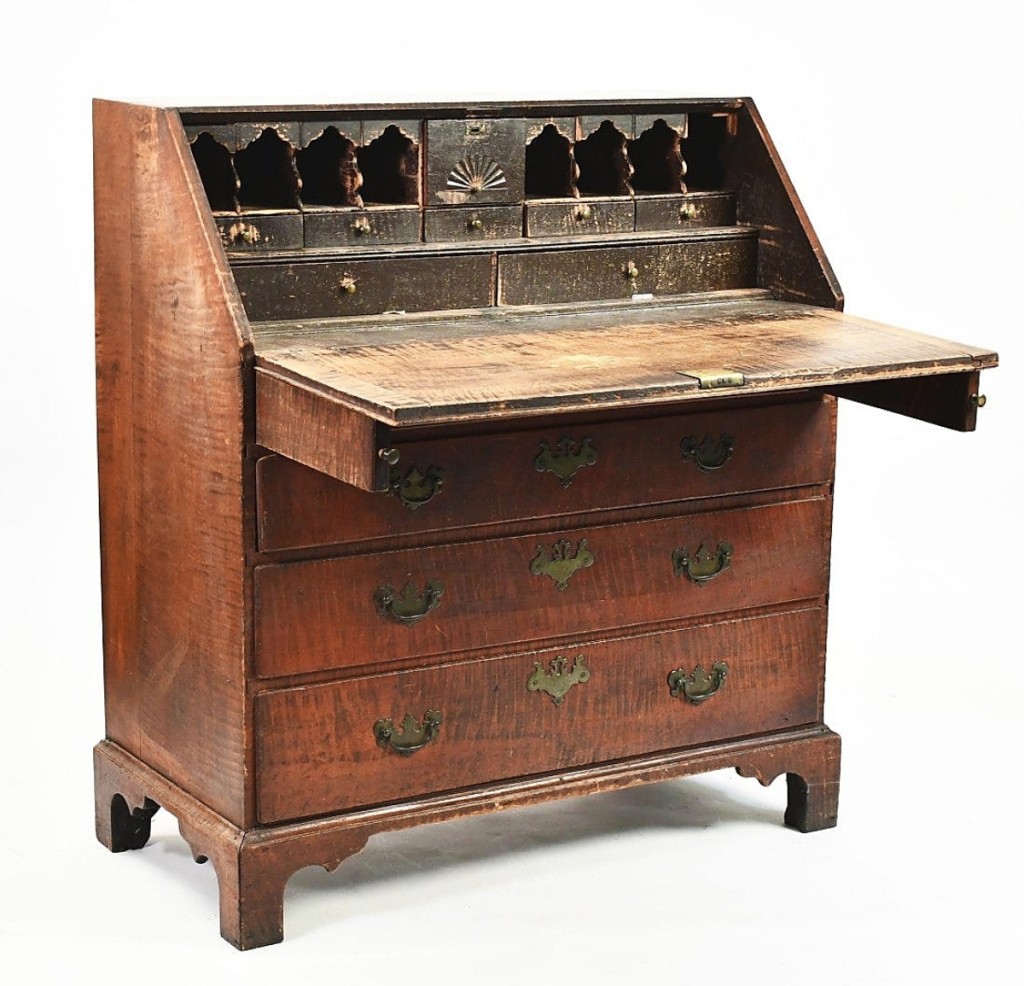 It was the most expensive American piece of furniture on sale. The untouched, red-painted tiger maple slanted front desk had been sold by Skinner in the 1980s for $ 30,000, according to Bill Smith. This time it came out for $ 20,600.

The wooden items included in the sale were of choice. An exceptional 13 inch red painted burl bowl with good provenance sold for $ 10,300. The catalog stated that it was from the Chip Myers collection in 1986. â€œThe Magnifying Glass Bowl was given to Reverend Campbell by the Mohawk Indians when he had to leave his lands to be part of St Regens / Reservation. A bundle of three small bowls, including a 5-inch covered burl bowl, sold for $ 3,835 and two small DIY carved mirrors fetched $ 2,714. A 36-hole redware candle mold in a wood frame marked J. Walker H. Bloomfield, with base cut out in old red paint, made $ 1,535, and a carved oak bible box dated 1695, with four small drawers, reported a reasonable price of $ 472.

There may have been a few good deals among the paintings sold. A signed 39 by 56 inch landscape by Benjamin Champney (1827-1907) was released for $ 2,596. It included cows and sheep, with mountains in the background, possibly Mount Washington. The same prize was a landscape of the Hudson River awarded to James or William Hart, both painters of Scottish origin in the late 19th century. A painting by Ralph Cahoon (1910-1982), which must have had a story to tell, sold for $ 7,080. It depicted a mermaid lying in front of four members of the Dartmouth College rowing team wearing swimsuits circa 1930. It was called “The Dartmouth Crew”. As he was selling it, Smith guessed that it may have been ordered for the team.

The sale included two documents that were said to have been signed by George Washington when they were cataloged. One was a handwritten and signed letter from 1799 written to Major Hepburn and Dundas in Alexandria regarding land. It was found by the current owner in a book on Presidents of the United States in his library. It sold for $ 14,160. Prior to the sale, Smith said he had several interested bidders read it over the phone. The second item, which was withdrawn from sale, is said to be a promissory note signed by Washington. Smith said it was determined to be a 19th century forgery by an accomplished forger, Robert Spring. Spring was born in England but moved to Philadelphia in 1858 and became an antique bookseller. And forger. He used blank pages from old books and ink that he himself invented. Prominent men like Washington and Benjamin Franklin were among his favorite subjects. He often claimed to be a woman who had to sell family papers to support himself. He was finally arrested in 1869, convicted and sent to prison, dying in 1876.

Prior to the sale, Smith said, â€œOnline sales bring us local people we haven’t dealt with in the past. It was a surprise to see that. For the most part, these are younger shoppers who are comfortable with social media, which we use more and more, and they buy directly online. And after the sale, he was visibly pleased with the results. â€œSelling online takes more work than the way we did business before. We take several photos of each item and make sure to describe the condition as accurately as possible. We take care of the after-sales storage and collection, but it’s worth the extra work. But it’s not all internet – we have an upcoming sale that will be live only, no internet, no phone. The way the auctions were.

The prices shown include the buyer’s premium as stated by the auction house. For more information, www.wsmithauction.com or 603-675-2549.